The Open Internet is Dead

2017 is the year I’m declaring the open internet officially dead. Sure, there are still enough websites around, many people still have the ability to publish what they want, how they want. Yes, there is a lot of independent reporting going on. There are still occasional pearls to be found, tightly-knit communities around and lots of collaboration taking place. But when you take a look at the mainstream usage of the internet, things look very different to how a tech person uses the medium. There is one gigantic player on the market, capturing practically all eyeballs: Facebook. I create and run the technical aspects of several high profile websites and this is how the referral analytics readout of all of them looks like: 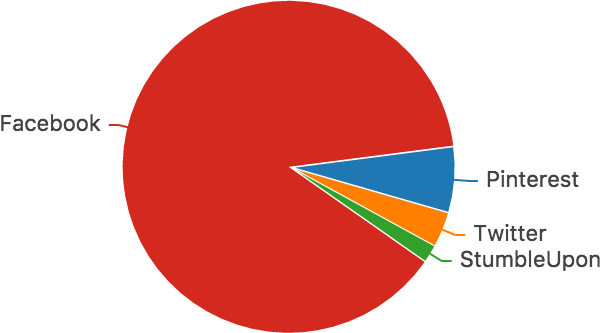 Bounce rates of 80%+, almost exclusively single page visits, total visit durations of 0-10 seconds and low recurring visitor stats speak all too clearly: Facebook has commoditized the open internet to nothing more than a source of free content to link to — and users are taking the bait. I can only speculate how many people today get most or all of their information exclusively from Facebook. It’s very much that if you are not on Facebook, you may as well not exist. The effects of such an unprecedented centralization of information are chilling. I have personally experienced this when I refused to join the “Cult of Facebook” and asked all my supposed friends to keep me up to date either via face-to-face conversations, text messages or email. Because, you know, no one uses a telephone to call anyone any more. The literally immediate drop-off in invitations, notifications of significant events (including but not limited to child birth) and general communication as a whole was stunning. I missed everything that makes social interactions social by not joining in to a walled garden controlled by a corporation intent on serving me ads and selling my personal information. It was nuts. It still is. But most of all, what it made brutally clear is who the people are I should surround myself with. It’s not the people Facebook defines as “friends”. It’s people I call friends. Those precious humans that tumble into your life by random chance and stay because they explicitly choose to.

Social interaction has devolved into a broadcast mentality. Instead of keeping an intimate circle of people informed, most opt for the “write once and broadcast to everyone” approach. In Germany, such an approach is called the “Gießkannenmethode” or “watering can method”. A term originating in the advertising industry, describing the classic approach of broad coverage of all channels evenly. It actually feels fitting here as what active Facebook (and all other forms of social media for that matter) users are doing: advertising themselves. Grooming their public image. Effectively taking part in the biggest narcicisstic undertaking of all time. The title of a popular book by journalist Richard David Precht comes to mind: “Who Am I and If So How Many?”

It’s very possible that I miss the beautiful and chaotic first years of the World Wide Web. There was no Google, no Facebook, no Twitter, no inevitable capitalistic push (yet) to turn anything and everything into cold hard cash. There were actual humans on the other side of a conversation: nerds, weirdos, scientists, students, regular people, anyone curious enough to explore this new digital realm. Like Twin Peaks demonstrated what TV could become, the early internet showed us how revolutionary different a connected world could be like. In certain ways this promise came to be but in most others it did not.

The open internet with sites like Geocities, despite all their issues and mostly catastrophic looks enabled a diversity and democratization of publishing never before possible. The original vision of the internet was one of a “read/write web”, meaning it was envisioned as being largely what Wikipedia is now – for all content on all sites. But as soon as people started making money, others joined in and wanted a piece of the cake. So Facebook opens its doors. Because humans are cheap and don’t want to pay for anything on the internet, ad-driven commerce is copied to the digital realm, making it ever more obnoxious and invasive. Since then Facebook has permeated everything that is online just to lure you back into their walled garden, where they make the rules, not you. When you’re an active user, they actually know more about what makes you tick than you yourself. The average user is worth about $12/year in ad revenue to them. That’s how cheap humans are. Even if given the chance to have their privacy preserved for a buck a month, many would opt not to. Because the implications and effects are not immediately apparent. The internet has become a place of commerce. Like every predominantly commerce-oriented environment, it has become simultaneously sterile on the out- and ugly on the inside.

That’s why I feel the internet may be more ubiquitous now than ever before but also a lot smaller.

Next: How Stranger Things Got its Retro Title Sequence